Julian Hanna: Manifestos are also critiques of the present

Julian Hanna was born in Vancouver, Canada and currently teaches Digital Culture at Tilburg University in The Netherlands. Previously he taught at the University of British Columbia and the University of Lisbon before joining the Interactive Technologies Institute in Madeira, where he was a researcher from 2013-2020. Since 2015 he has co-authored a critical futures blog with James Auger called Crap Futures. In 2017 they won (with Laura Watts) the CCCB Cultural Innovation International Prize for The Newton Machine, a speculative project on energy. He has written extensively on modern and contemporary avant-gardes, with a focus on movements, manifestos, and activism. His latest book, The Manifesto Handbook: 95 Theses on an Incendiary Form, was published by Zero Books in 2020.

Julian, you’re an avant-garde writer and one of the leading contemporary manifesto writers, so I’m wondering where does your own practice and background sit within Speculative Design?

I often wonder about that myself. I suppose the simplest answer is that when I first encountered Speculative Design I saw people doing two of the things I love most: thinking critically and talking about fictional worlds. I’ve been very fortunate to work closely with some great designers, James Auger in particular. I think our collaborations aspire to become something beyond both our traditional disciplines – something perhaps a bit richer in narrative and history than the usual designed object, and something more material and less gauzy or effervescent than the usual cultural criticism. There is also usually some humour – hence Crap Futures, a critical futures blog we started back in 2015 when things were not nearly so “crap” as they soon became. Two of our early posts, “The Automated Island” and “Et in Orcadia Ego”, are representative of our technology-viewed-from-the-periphery thinking at that time – that technology should solve actual, site-specific problems, which are quite particular on remote islands like Madeira, and Eday in Orkney. At the same time we (the Reconstrained Design Group) also wanted to come up with design principles that could be adapted to any local context, which we tried to do with The Newton Machine. As for the manifestos, there is a long tradition of manifesto writing in design as there is in art, literature, architecture and so on – Dunne and Raby’s “A/B manifesto” is a good example. So it’s been fun to co-author essays, posts, tweets, and our own manifestos to try to shake things up a bit and provoke some critical reflection on the state of things.

Recently you have published The Manifesto Handbook, a book which “describes the hidden life of an undervalued genre”. Can you tell us more about it?

Manifestos have been an obsession of mine for a long time – as far back as the nineties, in fact, when I had a teacher who was a part-time Neoist and she had everyone in the class write and perform Futurist-style manifestos. I make my students write manifestos all the time – they’re great for getting your thoughts together and finding out what you really believe, where you stand, and what you want to change. Manifestos are very future-oriented, but they are also critiques of the present, much as Speculative and Critical Design projects have this dual or multiple focus – an implicit history or genealogy, a critical look at where we are as a society or a discipline, and an extrapolation from these first two into where we might be headed – and might want to be headed – in the near and distant futures.

The book itself functions in part as a handbook, as the title suggests, so it lays out the components you need to make a manifesto. But it is also a sort of manifesto in itself, and it mirrors the manic energy and the fragmented, slogan-rich form of the avant-garde manifesto – all with the aim of encouraging people to find their community and write their own. One of the reasons I wanted to write the book now is that the manifesto has really made a comeback in recent years after languishing in relative obscurity. It hasn’t all been pretty because the manifesto is a complex form with a few skeletons in its closet, such as its tendency towards violent rhetoric, but it couldn’t be more perfectly adapted to the present moment of polarisation, political extremes, the desire for self-expression, and the need to make persuasive arguments in a compact and visual form. Manifestos have been doing that for centuries.

Can you explain the purpose of a manifesto and its correlation with Speculative Design practice, and how you approach the writing?

The purpose of a manifesto is either to announce a set of principles, a platform for a party or movement, or to stage an intervention for change when things become intolerable. (Sometimes it can be both.) Its correlation with design is that at the very least it acts as a provocation to start discussions around critical issues, and in the best cases it actually envisions and performatively brings about the changes it wants to see in the real world. These aims seem to me to be more or less in harmony with Speculative and Critical Design, even if the format is different. And they can be complementary, since it is useful to have a statement of principles or a list of provocations alongside a set of designed artefacts, as we did with Reconstrained Design.

How to approach the actual manifesto writing process is more complicated than you might think. Writing tends to be a very solitary and personal activity for most people, including myself, and at the same time manifestos are very public documents which usually require some collaboration. It’s important to avoid the “too many cooks” problem – so I usually find that what works best is either (a) passing around a draft, usually written by one person based on the group’s discussions, and letting everyone have a turn at adding to it and subtracting from it. Then maybe you send it back to the first person for a cleanup once you have all the ideas and opinions, to give it an even tone and a strong unified perspective. Or (b) you can find a great writing partner or small group – again I’ve been lucky in this regard, working with James or with my wife Simone – and write head to head on the same shared document until you get something that sings. This can work, in fact it’s probably the best way to write a manifesto, but only with the right chemistry. It was such a unique experience working with our little group in Madeira, in such unusual circumstances. I miss swimming in the sea and meeting over a barbecue and a bottle of wine, especially given the dramatic closing off of all such habits during the pandemic. You have to feel lucky when you find yourself in a team that clicks and the work transcends normal limitations.

Can artistic thinking be a meaningful tool in the midst of a global crisis?

I certainly hope so! We need all the help we can find and all the tools we can get our hands on. I recently moved from Portugal, where I’d been living for more than a decade, to The Netherlands for a new job teaching Digital Culture. I’m basically working together with students to understand the present moment – art, politics, society, design, it’s impossible these days to keep anything in separate silos – and I feel like creative and critical tools might be the most important ones we’ve got right now. I was glad to discover that a department like Culture Studies was open to, even enthusiastic about, incorporating case studies and perspectives from Speculative Design alongside art and literature and other forms of cultural analysis. It fits right in, and the students seem keen on digging into elements of Speculative Design even if they’re not from a design background themselves, because it is such a useful and original approach. I’ll show them Nonhuman Nonsense’s Pink Chicken Project, for example, on an ecological theme, or Superflux’s Mitigation of Shock; or Auger-Loizeau’s Smell+ or Happylife on the theme of intimacy-domesticity and technology. To be honest they relate to those projects or to a story by J. G. Ballard or Ursula K. Le Guin or Octavia Butler more readily than a dusty old essay on critical theory – much as I love critical theory.

Together with Simone Ashby, Sónia Matos and Alexis Faria you have created a card game called MANIFESTO!, a method devoted to help/support practitioners in creating future scenarios. Can you tell us more about the purpose of the game and how it works?

Yes, the game was developed as part of the Words in Freedom Project, which looks at manifestos and different forms of activism and collaborative writing, but more specifically we made the physical cards for a special manifesto-themed session we were leading in the “alt” section of the annual CHI conference in Glasgow in 2019. We wanted to avoid using screens, so we made something tangible and loud and kinetic – we had participants create tableaux vivants (“living pictures”) to represent their manifestos in the corridors of the conference, which was really something to see. One group started disassembling chairs to form a barricade. There was a megaphone for proclaiming manifestos. The irony of course is that now everything is once again – at least temporarily – online, and making tangible objects of any kind, from small things like cards to massive CNC’d prototypes, has become trickier. This has had a huge impact on research, and made us (and everyone, I imagine) rethink what and how and why we’re doing whatever it is we’re doing – whether it is still feasible, and if and why and how it still matters. 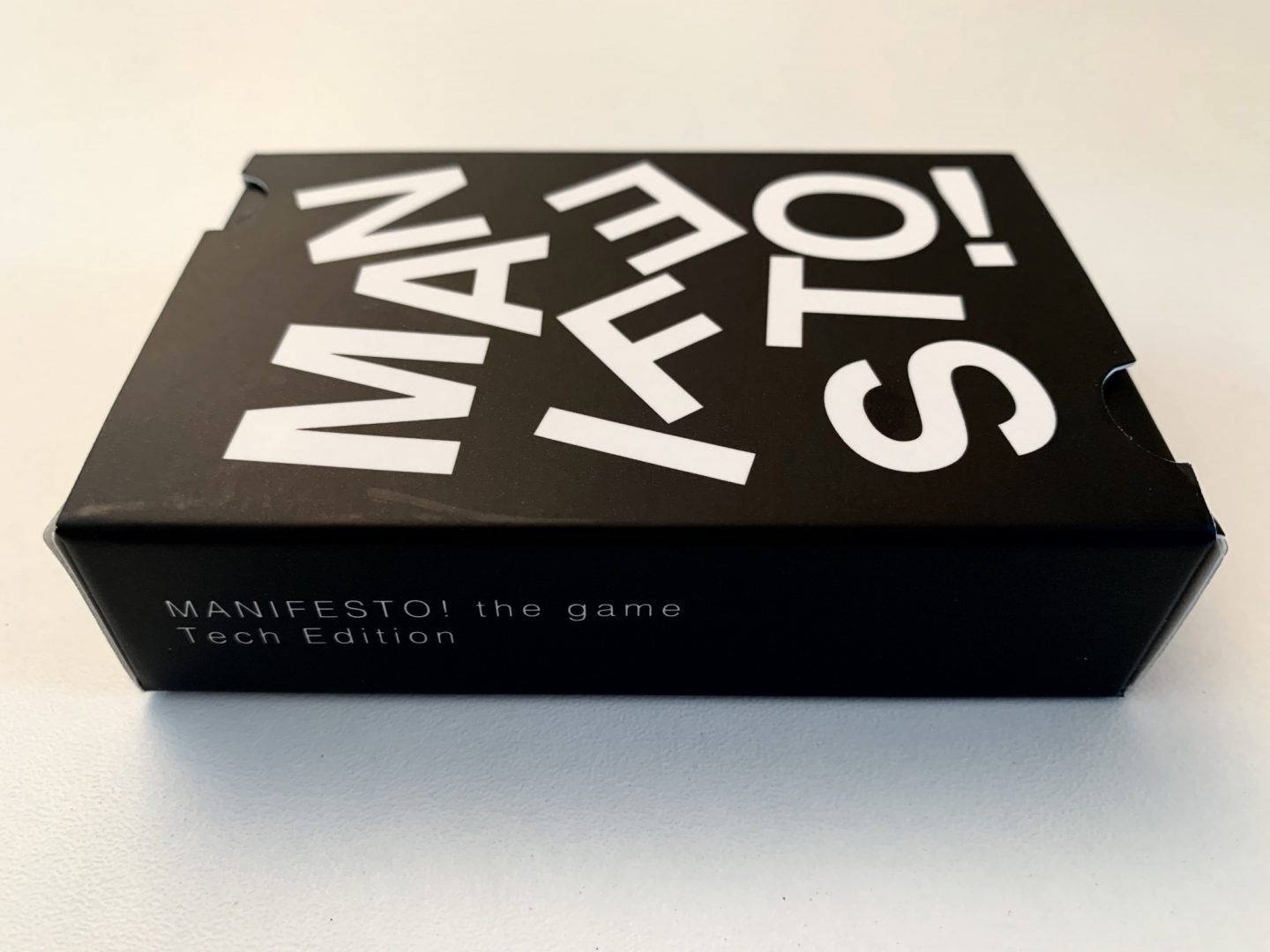